Pain and discomfort around the symphysis pubis (front of the pelvic ring) and low back and buttock pain is very common during pregnancy. It is reported that up to 25-30% (a quarter) of pregnant women suffer from pregnancy related pelvic discomfort.

Pregnancy related pelvic pain is believed to be caused by a special hormone called Relaxin which is secreted by the body to loosen the ligaments and to help in the delivery of the baby. These symptoms are otherwise commonly called SPD (symphysis pubis dysfunction).

Most of the symptoms of SPD are believed to resolve in approximately three to six months from childbirth. Pelvic floor/core stability exercises, a pelvic support and anti-inflammatory medication have been found to be helpful. 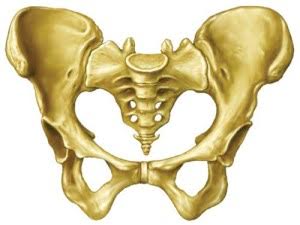 Due to traumatic child birth the various ligaments and support of the pelvis are injured and ruptured. In particular the supporting ligaments of the symphysis pubis (front joint of the pelvis) are either sprained or ruptured. The sacroiliac joints are unlikely to be ruptured because of strong ligamentous support but they are often sprained.

Women with post pregnancy instability complain of severe symptoms of SPD and often suffer from searing pain in the front of the pelvic ring around the symphysis pubis. They also complain of buttock pain due to the spraining of the sacroiliac ligament.

The pain commonly radiates to the groin and is associated with burning pain to the inner thighs and legs. These women also feel symptoms of instability in their pelvic ring and complain of grating sensation particularly when turning in bed and changing position. They struggle to climb stairs and are often unable to carry out manual activities and activities of daily living.

Physical relationships can also be very unpleasant and painful in this condition. Women with post pregnancy pelvic instability find ambulation extremely difficult and in extreme cases can become wheelchair bound.

Assessment is initiated by obtaining a thorough history and carrying out some special clinical tests. These women are typically tender over the symphysis pubis and demonstrate clinical signs of pelvic instability. 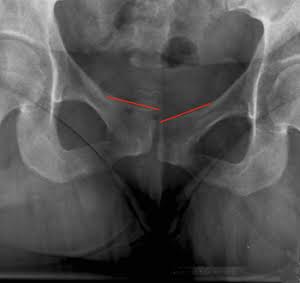 In suspected cases a flamingo/stork view demonstrates pelvic instability quite clearly. Further imaging in the form of an MRI scan helps to delineate pathology both at the front of the pelvis and also the sacroiliac joint.

Post pregnancy pelvic instability is initially treated conservatively with pelvic and core strengthening exercises and a pelvic belt/support. In advanced cases where there is frank evidence of instability and ligament rupture, which does not respond to non operative management, surgical stabilisation of the symphysis pubis (front joint of the pelvis) is carried out. In delayed and chronic cases where there is evidence of secondary sacroiliac joint involvement, these joints are also stabilised through a keyhole percutaneous method.

The symphysis pubis is approached under a general anaesthetic through a groin incision (like a caesarean section incision). The joint is cleared and stabilised typically with one of two plates and screws. The symphysis itself is fused with the use of bone graft. Patients are discharged home in 48-72 hours and require crutches for up to four to six weeks. It takes approximately twelve weeks for the symphysis to be fused solidly.

A very small minority of patients undergoing this operation could have wound complication such as infection and wound breakdown, prominence of metal work and very rarely injury to the urinary bladder.

We use cookies on our website to give you the most relevant experience by remembering your preferences and repeat visits. By clicking “Accept All”, you consent to the use of ALL the cookies. However, you may visit "Cookie Settings" to provide a controlled consent.
Cookie SettingsAccept All
Manage consent

This website uses cookies to improve your experience while you navigate through the website. Out of these, the cookies that are categorized as necessary are stored on your browser as they are essential for the working of basic functionalities of the website. We also use third-party cookies that help us analyze and understand how you use this website. These cookies will be stored in your browser only with your consent. You also have the option to opt-out of these cookies. But opting out of some of these cookies may affect your browsing experience.
Necessary Always Enabled
Necessary cookies are absolutely essential for the website to function properly. These cookies ensure basic functionalities and security features of the website, anonymously.
Functional
Functional cookies help to perform certain functionalities like sharing the content of the website on social media platforms, collect feedbacks, and other third-party features.
Performance
Performance cookies are used to understand and analyze the key performance indexes of the website which helps in delivering a better user experience for the visitors.
Analytics
Analytical cookies are used to understand how visitors interact with the website. These cookies help provide information on metrics the number of visitors, bounce rate, traffic source, etc.
Advertisement
Advertisement cookies are used to provide visitors with relevant ads and marketing campaigns. These cookies track visitors across websites and collect information to provide customized ads.
Others
Other uncategorized cookies are those that are being analyzed and have not been classified into a category as yet.
SAVE & ACCEPT